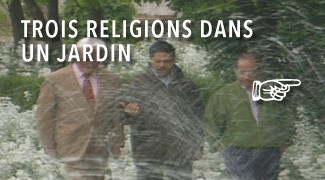 A portrait of the spanish arabian-muslim world, its mythic civilisation, a reconstruction from ancient documents and archeological research. The political and cultural stakes of a different communities’ coexistence, under the rules of muslim power. Among the major figures of that time were Averroes, a muslim doctor and philosopher, and Maimonide, a jewish jurist and philosopher. He was Saladin’s physician, a jurist, a philosopher, and head of community. He used the arabic language and wanted to harmonize the arabian and jewish cultures. Born in muslim Spain, he had to flee to Jerusalem and later to Egypt. He was fighting for sense in a fanatic world. His fight keeps all its sense and meaning in our present world. One century later, with the help of their texts from which he distinguished the religions considerations from the temporal ones, St Thomas of Aquin celebrated the Renaissance era.